Title: Free! The Road to Zero Prototypes with VI-grade

Description: Learn the major building blocks for achieving a human-centric development approach, discuss critical success factors, and illustrate the progress some automotive companies have already accomplished in decreasing the need for physical prototypes.

We work side-by-side with our clients to shorten development time using the following deliverables:

6 Use Cases for CAE Simulation in
Electric Vehicle Drivetrains

As electric vehicles take over a larger share of the automotive market, OEMs and suppliers alike need to make use of every tool at their disposal to improve the performance of their vehicles. At present, no tool is more essential than CAE simulation when it comes to helping manufacturers test the design of EM components and how they contribute to the structure, efficiency, and performance of a vehicle.

While a lot of attention is often focused on battery performance in EVs, the electric drivetrain also presents completely new engineering challenges that require extensive simulation in order to understand how interconnecting systems affect each other. From our experience working in the automotive industry, we have identified six key areas where simulation helps EV engineers improve drivetrain performance. Let’s take a closer look.

In automotive engineering, reducing NVH (noise, vibration, and harshness) is essential to providing a comfortable passenger experience. Combustion engines are significantly more noisy than electric motors, which might lead some to believe that NVH reduction doesn’t require the same level of care and attention. However, the noise of the combustion engine masks a lot of NVH issues that would otherwise be problematic. With the engine noise gone, passengers are more likely to notice outside noises, as well as sounds from the gearbox or coolant systems.The issues are similar for vibration. A vehicle that moves and shakes is disquieting to passengers, and gives an impression of low quality. While passengers expect vibration from a combustion engine, electric vehicles will still experience vibration conditions when they are on the road. These can be more noticeable to passengers, leading them to feel less satisfied with the vehicle.

These factors are what make NVH simulation in electric vehicles so important. CAE simulations can show how disparate parts work together to contribute to passenger experiences of NVH. These can then be remedied in the design.

Electric vehicles have typically lagged behind those with internal combustion engines (ICEs) in terms of power and performance. This has been a barrier to wider adoption, as improvements in motor and transmission performance have come at a tradeoff to battery longevity. However, newer EV technologies have increased the efficiency of electric powertrains, allowing them to compete with and even outperform their ICE counterparts.

Multiphysics simulations have been integral to these improvements, and can help automotive manufacturers develop even better designs. This can be particularly important in optimizing motor efficiencies with gear ratios, to improve performance on highways or during uphill driving.

Proper thermal management keeps components operating at optimal efficiency, which results in less drain on the battery and greater range for the vehicle. Thermal management systems in electric vehicles are more complex than their ICE counterparts, as batteries must be either cooled or heated depending on operating conditions, and because EMs don’t generate any waste heat that might be used to warm the cabin.Analyzing the way motors, inverters, generators, and batteries work together to consume energy is an important part of thermal management. Simulations can be used to model the entire vehicle to better integrate these systems for more efficient use.

Electric vehicles require different lubricants than ICEs. Without fossil fuels and with fewer moving parts, these systems run cleaner, meaning the engine oils will collect fewer contaminants over time from burning fuel. However, EV motors operate at very high speeds, and still require both oil and coolant. And, while EV transmissions are different from ICEs, they do still require lubrication for the gear reducer.

Thus far, there is no one solution to which lubricants should be used for different EV transmissions. While some manufacturers use traditional transmission fluid, others are relying on grease bearings with oil lubricants. CFD simulation can help engineers understand which lubricants work best based on their design choices.

A key strategy for improving fuel efficiency in electric vehicles is to reduce the weight of the vehicle itself. Increased strength and stiffness can also improve the responsiveness and speed of electric motors, leading to better operating conditions. However, for a manufacturer to move from traditional metals to new, lightweight alloys, they must be able to ensure that these new materials can withstand the strains of use within an electric vehicle.CAE simulation can show how these new materials behave when used in EV driveline components, from the motor to the gearbox to the structural housing, so that manufacturers can continue to find new and more effective materials for their vehicle designs.

The reputations of automotive manufacturers are made or broken on the reliability and longevity of their products. Premature failure of components leads to lost trust among consumers, as well as extra expenses for manufacturers in case of a large recall.

Using CAE simulation, engineers can create models to run fatigue tests and predict failure conditions for every component in the EV driveline. These simulations can help manufacturers determine repair schedules and write better warrantees for their vehicles.

CAE VAlue can support your simulation needs for electric vehicle drivetrains.
CAE VAlue offers CAE simulation support for OEMs and suppliers in two key ways. First, we are value-added resellers (VARs) of VI-grade simulation apps and driving simulators, Siemens Simcenter HEEDS and Amesim, SES-Agile Tire, and our own ParaMount bushing simulation tool. For manufacturers who hope to expand their CAE departments we offer support for using this software to set up custom workflows.

As CAE consultants, we bring our multidisciplinary expertise to the table, helping our clients find solutions to complex problems. We can perform CAE simulations for our clients, increasing the capabilities for those who do not have CAE engineers on staff, and expanding the capacity for those who need extra assistance during peak production times.

If you are looking for a CAE partner to help test designs for EV components, contact us.

Simcenter 3D is growing, fast! This release is no exception, with updates across the business lines enabling users to visualize their results more easily and more collaboratively than ever before. Enhancements in this release help you drive engineering innovation while continuing to focus on our four key pillars:

Most engineers perceive the traditional simulation process as too slow. Simcenter 3D eliminates the simulation bottleneck through more efficient simulation processes.  The following enhancements in this release help you speed modeling and simulation so you can spend more time engineering: 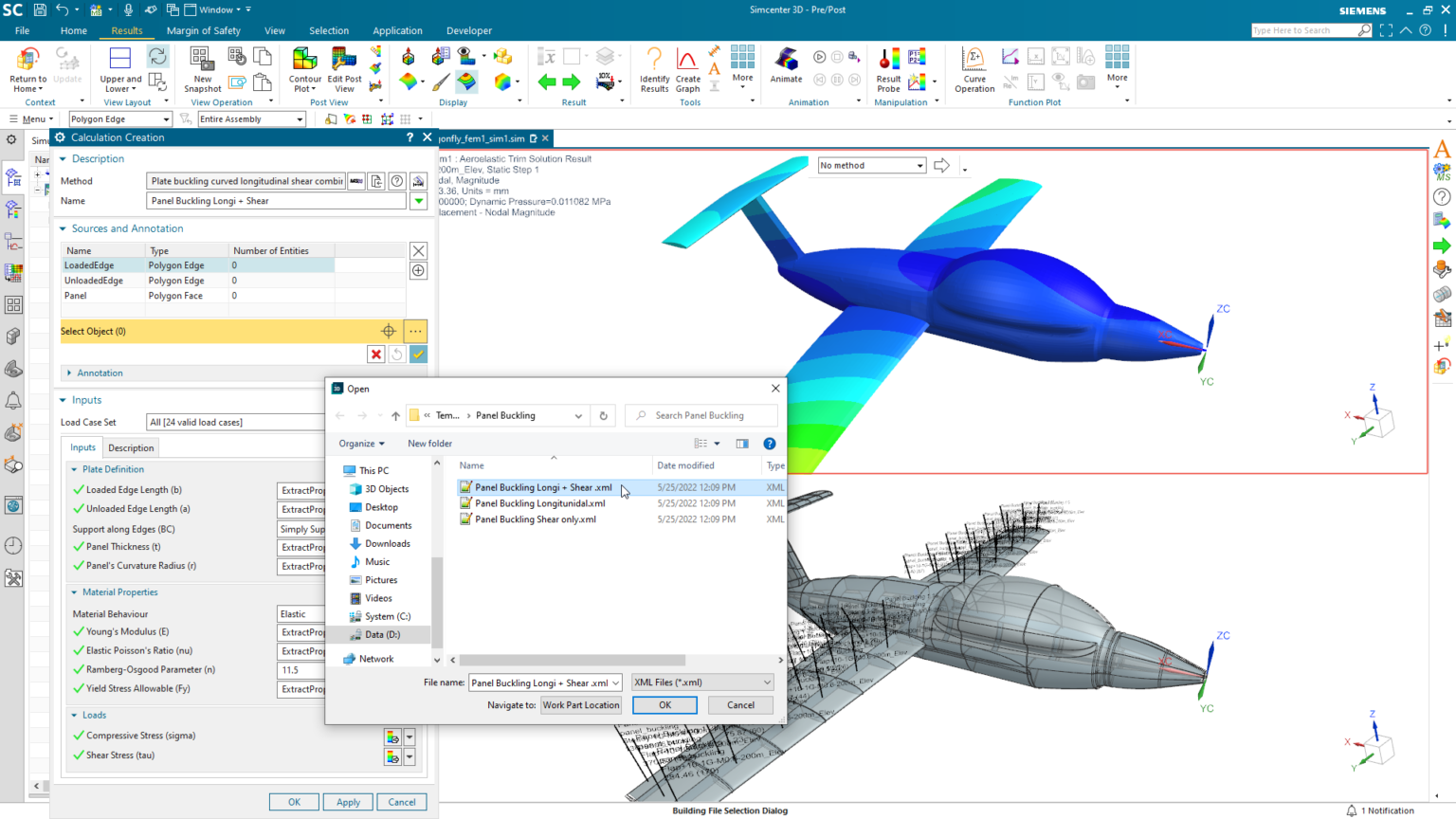 Simcenter 3D Aerostructures 2206, has a new update to the single margin of safety template. With this template it is now possible to use a single template in multiple studies.

It is now possible to complete your strength analysis as part of your fatigue analysis. Making the process more simple with less parameters.

Learn how this can be used 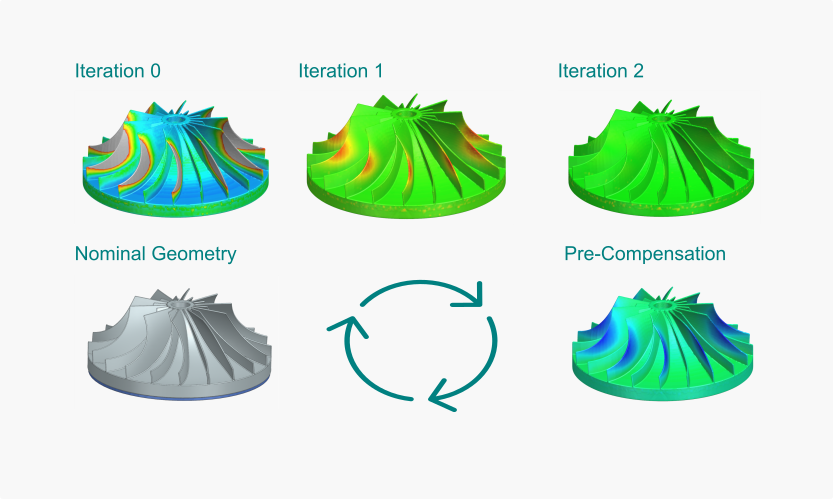 The new optimized compensation scheme iteratively displaces all nodes, until the distortion simulation on the compensated part predicts a final shape close to the nominal geometry. 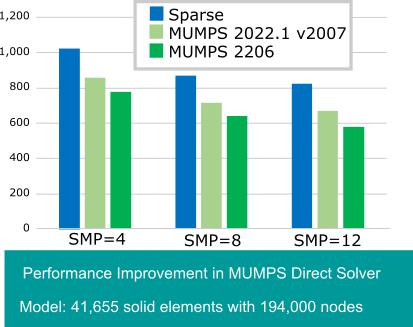 Your products are complex, and you need to accurately simulate and predict performance by capturing the right physics, geometry and operating environment.  Simcenter 3D’s multidiscipline integration helps you simulate real-world conditions more accurately, seamlessly transfer data and streamline multiphysics workflows. Here are some of the highlights from the 2022.1 release that help you model the complexity of your products better:

Addressing motor whine and gear whine requires a deep understanding of both the electrical and mechanical systems. Properly capturing relevant effects requires a lot of detailed information such as the stiffness of the assembly, electromagnetic excitation, gear micro geometry, stiffness of light weighted gears, bearing clearances, bearing preload, etc. Now you can consider both the mechanical and electromagnetic excitations in a single environment.

Holes and gaps are often found in consumer electronic products, like smartphones near the speaker and microphone positions.

You can simulate the (damping) effect these have on the sound, more accurately now, and without any penalty on compute time, as equivalent fluid models or surface impedance models are used, instead of resorting to more expensive Linearized Navier-Stokes formulations.

Characterize your relay with a transient electromagnetics simulation in Simcenter 3D. Then you can observe the evolution of the position and torque over time, as shown in the image.

Simulation needs to happen at all stages of development – including in the concept and design stages.  Enhancements in this release of Simcenter 3D help democratize simulation beyond the realm of simulation experts: 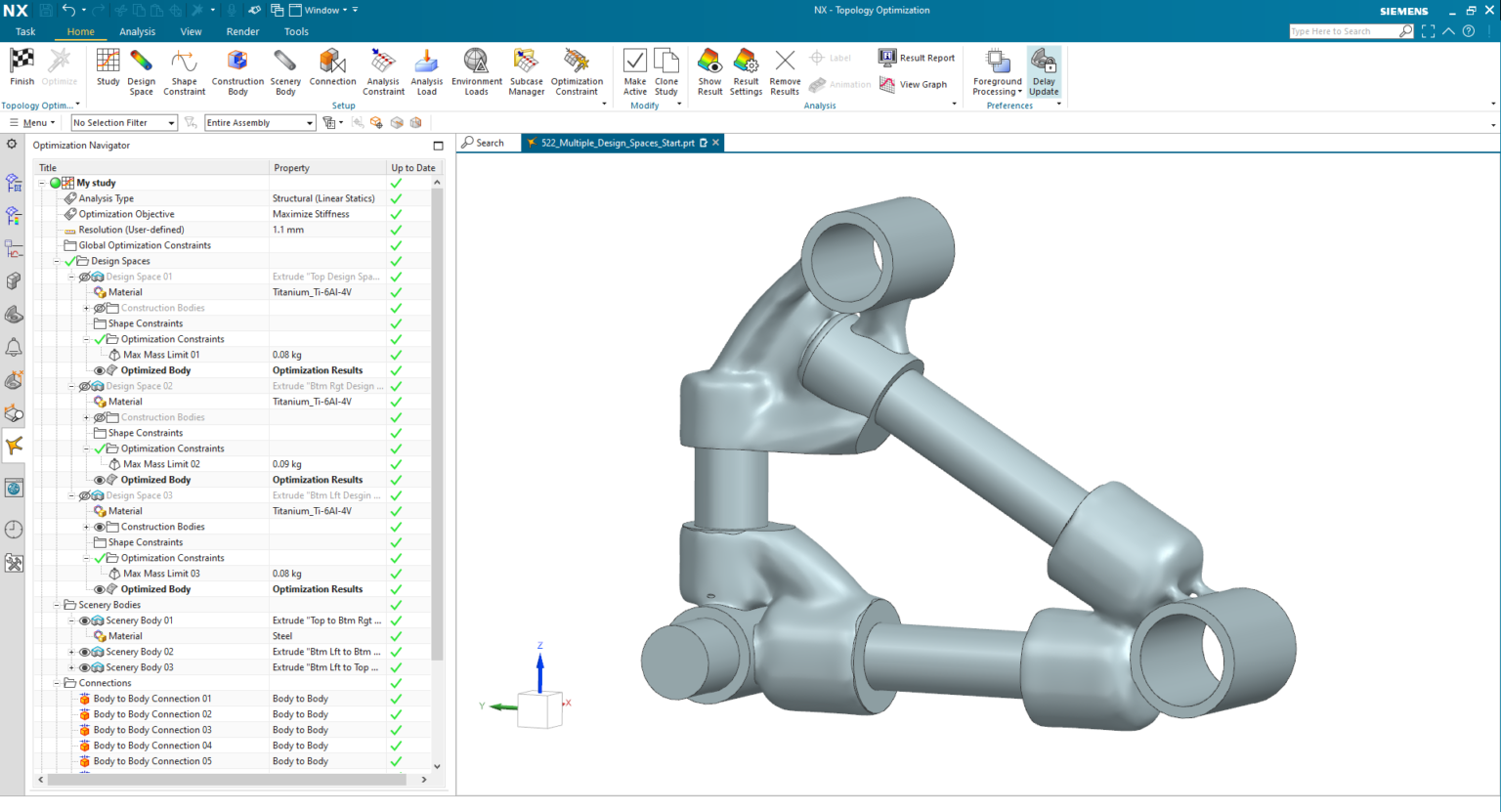 Designers have new improved flexibility with the ability to include bodies in the design that are not part of the optimization, and the option to use Face to Face, and Body to Body connections with the design space. While you can now constrain the optimal design for the center of gravity within a sphere, cylinder, on or within proximity of a plane. 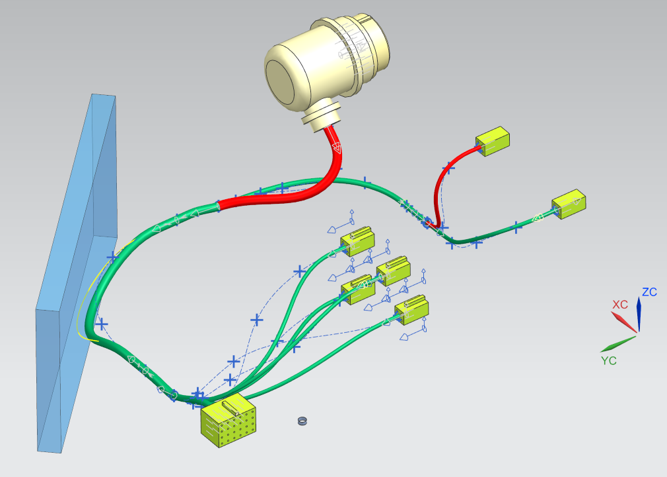 Embedded optimization can now use instant design & update functionalities. while updates to the CPU time mean that it is easier to travel through the design space and optimizations as much as 20x faster.

Finally, simulation shouldn’t happen in a vacuum.  Simulation is just part of the overall development process, and these enhancements in Simcenter 3D help you keep simulation integrated with that process: 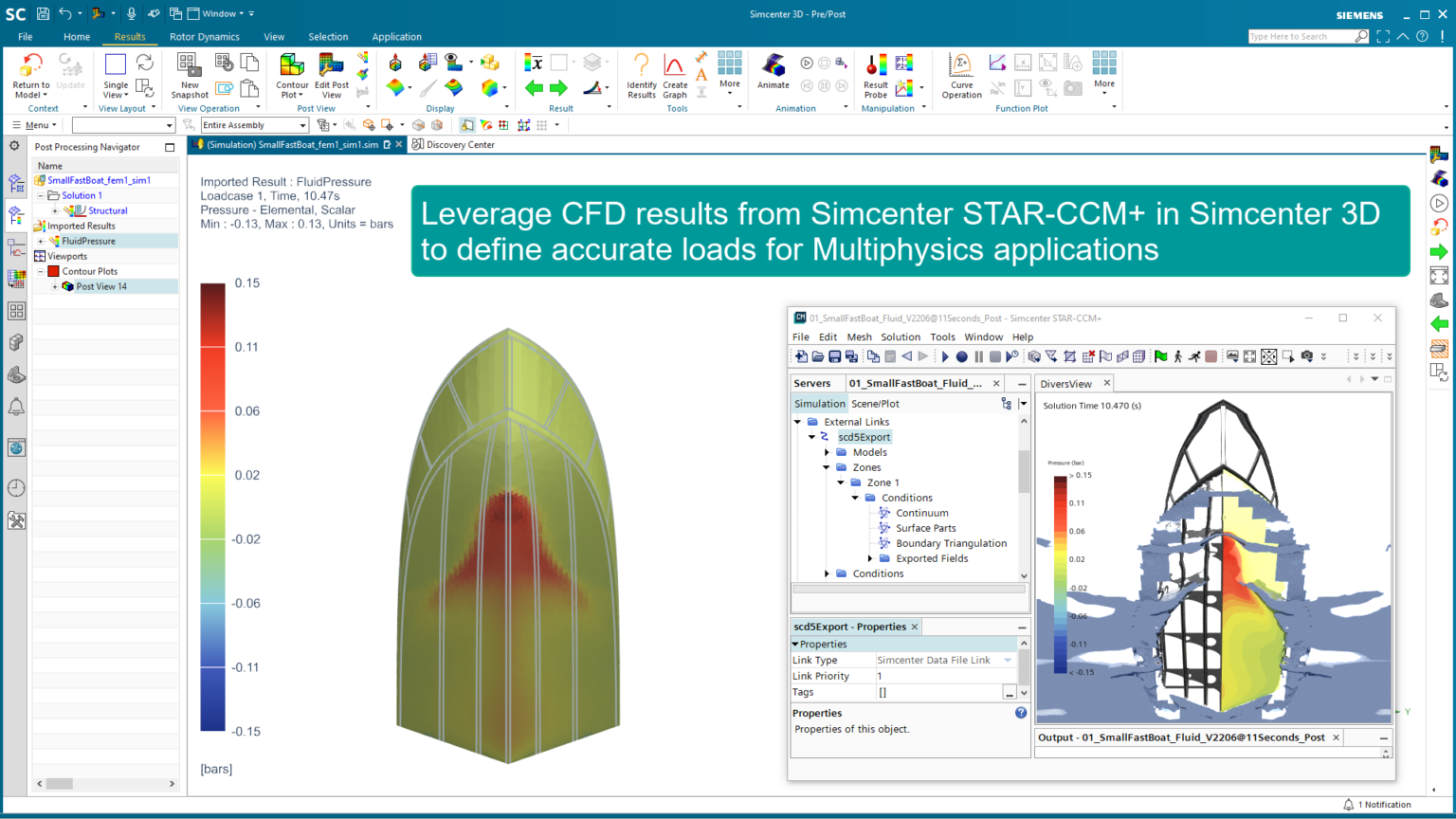 Republished from Siemens blog
©Siemens - all rights retained by Siemens